Born in 1989 with Swiss, French and Chinese origins, pianist François-Xavier Poizat graduated from the Geneva and Hamburg Conservatory, from the Juilliard School in New York and from the Accademia Nazionale di Santa Cecilia in Rome with the teaching of Alexeï Golovin, Evgeni Koroliov, Nelson Goerner, Matti Raekallio and Benedetto Lupo. It is Martha Argerich who propelled him on the international stage by inviting him when he was 12 years old to the Pacific Music Festival in Japan, recognizing his “deep lyricism and remarkable virtuosity”. This marked the beginning of a career that has brought him to perform in already 28 countries in Europe, Asia and America, in venues like the Victoria Hall in Geneva, the Tonhalle in Zürich, the Konzerthaus and Philharmonie in Berlin, the Seoul Art Center, the Great Hall of the Moscow Conservatory or the Carnegie Hall in New York.

His journey is sprinkled with collaborations with big orchestras such as the Suisse Romande and Svizzera Italiana Orchestra, the National du Capitole de Toulouse, the Lithuanian and Armenian National Chamber Orchestras, the Zürich Chamber Orchestra and the Poznan Philharmonic, among others. He has performed under the baton of Philippe Béran, Thierry Fischer, Neeme Järvi, Lukasc Borowicz, Bernard Labadie or Frédéric Chaslin, in prestigious festivals (the Roque d’Anthéron in France, the Progetto Martha Argerich in Lugano, the Schubertiade in Porrentruy or the Septembre Musical in Montreux in Switzerland).

His large solo and chamber music repertoire includes 500 years of music and about thirty concertos, as well as all works with piano by Maurice Ravel, his favorite composer.

Beside his principal activity as a performer, he is currently the director of the International Puplinge Classique Festival in Geneva, a position he has held for the past 13 years, and has recorded 5 CDs with the Naxos, Ars Produktion and Piano Classics labels. Laureate of the Leenaards and Migros scolarships, and regularly recharges himself by playing jazz and studying martial arts, which he has done for 20 years. Founded in February 2010, this music festival has become one of the most important music event in Geneva, Switzerland.

François-Xavier is the director from the beginning. 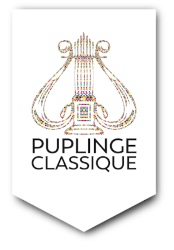